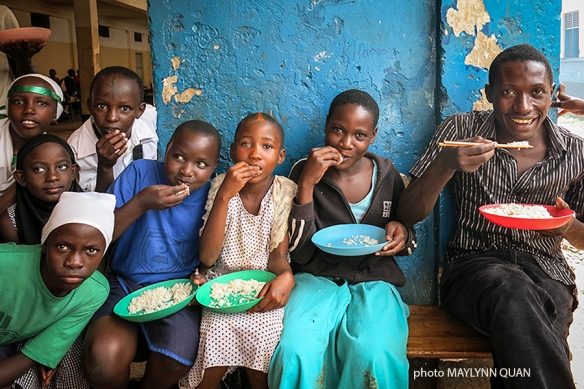 THANK YOU Robert Delaney
rob@transmedia9.com
FOR THIS MOST AWESOME PRESS RELEASE and for your ongoing support from day one! x0x

TORONTO, April 5, 2013 /CNW/ – Toronto restaurateur Sang Kim is teaming up with Kids Canada for a direct feed between Toronto and Kampala that will teach kids on both sides the art of sushi making. This first-of-its-kind Toronto-Kampala Sushi-Making Direct-Feed is the latest in a series of events organized by Kim to use sushi to promote food culture, cross-cultural understanding, and fun.

Taking place at Kim’s Yakitori Bar (the latest venture from the creative force behind Toronto’s Blowfish and KI Modern Japanese), the Direct-Feed will link groups of children in these two distant locations will via Skype to learn how to make Japan’s most famous export, now enjoyed on every continent. They’ll be given all the necessary ingredients, taught the basic sushi-making technique, and then given a chance to bond with one another through the creative exercise of their newly-learned craft.

When not writing or cooking up another restaurant concept, Kim organizes events and classes that allow people of all ages to interact by creating something delicious. His sushi-making workshops, for various organizations and individuals, have engaged thousands of people in the city of Toronto. The insights Kim has gained while leading people on the path to discovery through sushi are documented on his blog, http://www.sushimakingforthesoul.com.

Kim and Quan hope that the fun and cross-pollination they expect from the Toronto-Kampala Sushi-Making Direct-Feed will help lead all of its young participants to fulfilling futures, rich with creativity and success.